Crickhowell Gets A Brasserie

Crickhowell has a new restaurant, well brasserie to be exact, the food offering in and around the eastern end of the Brecon Beacons just keeps getting better. This new brasserie, Number 18, (that’s the name simply because it is number 18 Crickhowell High Street) has been opened by my friend Steve Lewis who all his business life has relished a challenge.
By George he got one when he decided to extend his coffee shop into the derlict cottages behind the coffee shop and turn the space into a brasserie. He had to wrestle with the town council, the National Park Planning Committee, the Environmental Health Officer ( who doesn’t like anything cooked rare) and British Gas to mention just a few.
Despite all this thrown in his way he was just seven days behind schedule when he opened last night to a select few who were invited to put the new kitchen, the new menu and the new staff through their paces before going public in about a week’s time.
First impressions count and the new interior looks great; steel, glass, welsh oak and stone come together to give a contemporary, solid feel with plenty of light everywhere. The space is on two floors with the western end of the top floor given over to a window that runs from floor to ceiling giving stunning views out on to the surrounding hills. On the ground floor you can observe the action in the open kitchen from your table. 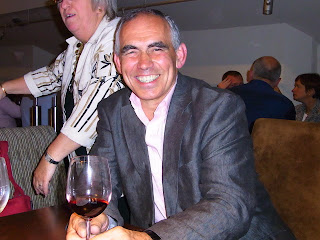 To break them in gently Steve had given the kitchen a limited menu to prepare and serve to all 40 of us. We started with either a salad of Fennel, Radicchio & Perl Las (Welsh Blue Cheese) or Linguine with Oak Roast Salmon then for the main course we had a choice of a couple of brasserie classics; char grilled chicken or an 8oz welsh fillet steak. For pudding we were offered either a very refreshing Lemon Posset or delicious Chocolate Truffle Torte. Given the situation I think everyone agreed that the chefs had made a very good start in laying the foundations for a successful kitchen. We had a great evening and would like to thank Steve and his team and wish them all the best for the future. I for one will be back. Well, I have to go back to pay my debts. I bet Steve a bottle of champagne he wouldn’t be ready for his opening night!