Origins Of The Christmas Tree

The Christmas Tree. Aside from the jolly man in red himself, is there a more iconic symbol of the festive season? We think not. To celebrate the coming of our favourite holiday, the team at our Brecon Beacons hotel  decided to explore the history behind the famous conifer.

Long before Christianity, trees and plants that remained green all year round held a special meaning for people in the winter. In many countries it was thought that evergreens would ward away any malicious spirits, witches, ghosts and illnesses – they decorated their doors, windows and homes with them.

Germany is often credited with popularising the Christmas tree tradition that we know and love. Dating back to the 16th century, devout Christians would bring decorated trees into their homes laden with candles.

It has often been thought that the protestant Martin Luther began this Christmas tradition. According to one story, it was late at night and Luther was walking home through the woods. He noticed how beautiful the trees looked in the moonlight, being lit up by the stars. It is at this point we can almost imagine a similar scenario if one was to walk through our garden, or into the woodland our hotel stands proudly within. In our landscape, it’s not hard to imagine yourself in this scene, but we digress! In his eagerness to share this beautiful scene with his wife, he cut down a fir tree and took it with him back home. Once inside he put numerous small candles on and amongst the branches and said that it would symbolise the Christmas sky – and thus, the Christmas tree was born.

This was later popularised in Britain in 1846 by Queen Victoria and her German prince, Albert. The two royals were sketched for the London News standing around a Christmas tree. Due to the popularity of Victoria, the tree soon became fashionable in Britain and America alike.

The hotel has two Christmas trees up for the festive season. A large 18-foot tree in the hall that goes all the way up the stairwell and a smaller tree in the sitting room.

Prescribe to whatever origin tale you wish – we’re just delighted to be able to share our own Christmas tree with residents during the festive season. While our Hotel in the Brecon Beacons may be fully booked this Christmas, we heartily invite you to join us next year.

To celebrate with us at our Brecon Beacons hotel  and to experience our own Christmas traditions for yourself, be sure to book sooner rather than later for 2019.

Things To Do In The Brecon Beacons This Winter

It’s hard to think that we’re only part way through winter (it doesn’t officially turn to spring until the 20th March). There’s no point in sitting around and waiting for the sun to return because there’s still plenty of things to do in the Brecon Beacons. 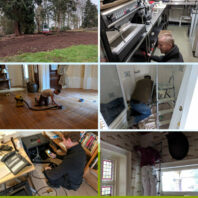 What Have We Been Up To?

We Have Just Opened After Our Annual 4 Week Closure And People Often Ask What We Get Up To When We Are Closed. Here Is The Answer…