Planting One Million Trees In The Brecon Beacons

We are calling on our guests to help local tourism businesses support an urgent local initiative to plant one million trees in and around the Brecon Beacons in 2022.  By taking action together we can begin to make a difference.

Trees give life. It is hard to overstate their benefit. They are fundamental to our landscapes, our lives and the future of this planet. As John Cleese might well have asked in Monty Python’s ‘Life of Brian’: ‘Alright, but apart from the wildlife habitat, the biodiversity, the food, medicine, shade, timber, improved air quality, natural flood management and better soil, what have trees ever done for us?’

Most importantly, in today’s urgent debate about climate change, trees sequester carbon. They absorb carbon dioxide from the atmosphere, storing it in their trunks, branches and roots, before releasing oxygen back into the air. Trees mitigate climate change and tree planting is now recognised as one of the best ways to tackle this global crisis.

If growing trees seems like a no-brainer, why are we planting so few in the UK? With just 13% tree cover, we are the second least wooded country in Europe (where the national average is 37%). The 2019 Committee on Climate Change report has called for an increase in UK woodland cover to 17%, if the UK is to reach net zero emissions by 2050. Britain needs to be planting 75,000 acres annually. Last year we planted barely a third of that – and 80% was in Scotland. In England and Wales, we need to plant six times more trees. Six times. And these figures don’t even account for the millions of trees we are currently losing to new pests and pathogens like ash dieback.

Driven by a mixture of shame, despair and urgency, Keith Powell, a seventh generation Black Mountains’ farmer and a vet, and Rob Penn, author and woodland campaigner have decided to initiate a tree planting project; STUMP UP FOR TREES. Both of them have previous: Keith has planted 17,000 trees to date, on his own; Rob has been an active advocate of woodland management and tree planting through journalism, his books and TV programmes.

Their project—called ‘Stump Up For Trees’— will see a million trees planted in and around the area of the Brecon Beacons National Park, in a day, in March 2022. They are not going to do the planting themselves—10,000 school children are. To plant a million trees, the team need to find 400 hectares (the area of the Park is 134,400 hectares). The land is expected to come from farmers and a variety of other landowners. Generally, it will be less agriculturally productive land. We know the appetite to plant trees is there; the current Welsh government woodland creation scheme, ‘Glastir’, administered by Natural Resources Wales, is heavily oversubscribed.

The cost of the plant itself and, importantly, the additional cost of 12 years of aftercare for the trees to ensure they become established, is £4.5 million—a significant sum. As the government funding is lacking, we propose to raise the money privately, through a mixture of funding streams including corporate donations, selling carbon credits, crowdfunding and, crucially, a host of community driven micro- funding initiatives that will encourage people who live in this area to own the project. It is ambitious, but we need to be ambitious now.

The Tourism community wants to play its part to and we hope that visitors who have enjoyed coming to the Brecon Beacons will STUMP UP FOR TREES.  Our micro-funding initiative is called ROOM FOR TREES and is simple in its concept. Gliffaes Hotel will be donating £1 for every room night sold towards the project. If you stay for two nights with us we will give £2 and so on. If you come and stay with us we will take the liberty of adding an optional £1.50 to your bill which we hope you don’t mind contributing towards this ambitious plan. Of course, you are most welcome to give a little more if you wish or give nothing if you prefer.

The four main aims of the project are: carbon sequestration; enhancing biodiversity; education (we will take our own tree planting programme into dozens of schools in and around the area, to recruit our young tree planters for the big day); and, fourthly, helping upland farmers transition into the new era of land management (beyond Brexit and the Common Agricultural Policy). Importantly, we also propose to produce a booklet, which will be freely available as a downloadable pdf, describing every step we have taken to realise this project. It is hoped other communities across the UK will then initiate their own tree planting schemes without waiting for government bureaucracy to get in gear, or for public funding.

To date, we have had meetings with Coed Cymru, the Woodland Trust, the National Trust, various members of staff at the Brecon Beacons National Park Authority, Gwent Wildlife Trust, South and West Wales Wildlife Trust, Farmers’ Union of Wales, National Farmers’ Union of Cymru and many others. Everyone has been supportive. The Woodland Trust have offered to provide one million seedlings for the project.

It is also worth noting, we will use seeds with local provenance (and approved under the UK Sourced and Grown Assurance Scheme); we don’t propose to use plastic tree guards; some of the land we plant on will have public access; we propose to economically incentivise landowners to provide public benefits including site specific biodiversity programmes, bird boxes, habitat for pollinating insects and more.

As the American poet W.S. Merwin wrote: ‘On the last day of the world I would want to plant a tree.’ We have to engage, as families and schools, as communities and as a nation, on fixing the future. We cannot wait for the government to lead on tree planting. We have to do it ourselves. And the time is now. 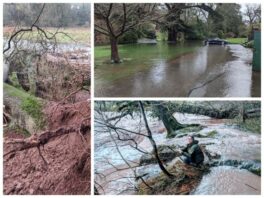 Flooding On The River Usk

The local town of Crickhowell was badly effected over the past weekend where the Usk broke its banks around the area of the Crickhowell bridge.