Secrets of the Usk - a little piece of fishing history

The piece below comes from an old copy of the ‘Shooting Times & Country Magazine’ from July 1987 and was sent to me by a good friend of Gliffaes and masterful fly fisher, Tony Bostock.

The piece is written by Colin Willock (Town Gun was his byline), an old fashioned country sportsman who loved being in the field or in the stream and was after quarry whatever the season. He writes about fishing on the Usk with my father-in-law, Nick Brabner who fished the Usk all his life. He honed his tactics down to a couple of basic tenants; fish the big river like lots of little streams, keep moving and fish a short line. He always caught trout and his ‘rules’ apply to this day. Enjoy. 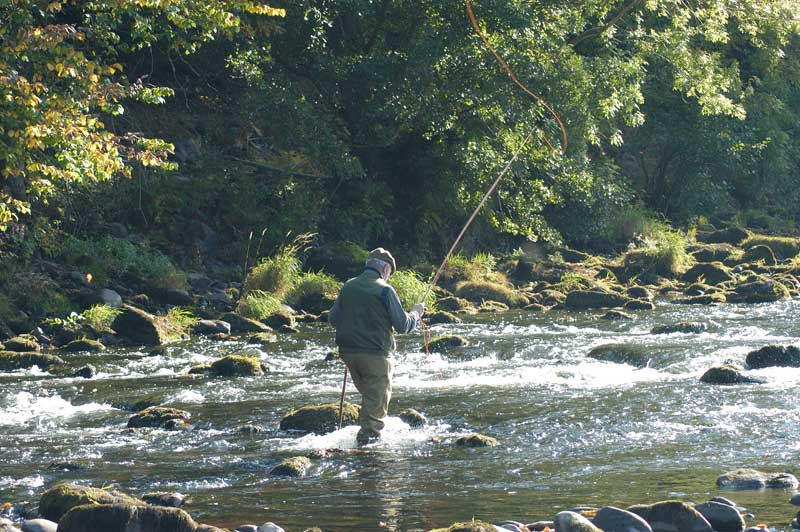 Secrets of the Usk - all is revealed by Colin Willock

The rain started coming down at midday just as the forecast had said it would it drifted in curtains up the Usk Valley. I’ve seldom seen anything quite like it, not even in Wales. It was if each squall were a separate weather system made up of 20 or more components of sheer malevolent moisture.

The stuff seemed to hang on the wind like a great, grey, wet blanket, its folds whipped about by the gale. These curtains of water didn’t actually drop until they reached you. Then, someone up top took the curtain rail away and the whole lot fell down just as if a fire fighting aircraft had opened its tank directly overhead. Nasty!

Nick Brabner and I made up our minds to fish his delightful Gliffaes Country House Hotel water together that evening when we met at breakfast. It was fine then but Nick had heard the forecast and I hadn’t.

This is the hotel’s busy season. In fact, except when it closes briefly in March, it is always the hotel’s busy season. Justly so. It’s a beautiful, restful and hospitable place. When my wife and I turn up, Nick likes to use the visit as a pretext for getting a few hours off on the river. So, no matter what the forecasters threatened to produce by evening, we would fish, come hell, though preferably not high water.

The first thing to accept about the Usk is that though it is a rocky based and fast-flowing it is very far from being a “lean water”. Unlike many hill rising streams, it boasts an astonishingly rich fly-life. Early on in the season, there are March Browns. There is always a widely based menu of ephemerids, olives and pale wateries, mayfly even, and in June, succulent sulphur-yellow members of the mayfly family whose scientific name I would like to know. The fish dine on the “creepers” and the flies uncooperatively hatch out on dry land.

In the evening the fish, which the novice suspect are totally absent from the River, sometimes for a brief crepuscular minute, go mad on sedges, though not often enough for my liking.

Under the oak trees on the deep still reach on the top Gliffaes water at Llandetty, big trout lie waiting for the oak bug. It isn’t a bug at all but a small green caterpillar, probably the larva of the winter moth or something similar on which tits rely to feed their young.

These creatures lower themselves from the branches on slender threads of silk. Even the most experienced high wire artistes are known to make mistakes and the trout are waiting for those which lose their grip on the situation.

Flip a small, green, woollen imitation sideways under the oaks and you can quite easily be surprised by a one and a half pounder, and that’s a very big fish on the Usk.

What I have learned from Nick Brabner is that trout are exactly where you experience of reading such waters tell you they ought to be, in dubs, to the side of large rocks, in the little stream bits between runs where few visitors ever look for them.

Even more important, I have learned the hard way that the flashy long cast is of little use on the Usk. The trout think very little of such manipulative skills. The currents between angler and fish pull and push, tweek and nudge so that the fly or nymph never proceeds for more than an inch or two as a natural unattached insect should and would.

Nick seldom fishes with a line longer than 1 1/2 rod lengths. He fishes a slightly longer rod than I do, 9 foot 6 to 10 foot I would guess. The reward is that you can keep in touch with your fly, lifting clear of the twisting treacherous currents and thus achieving natural presentation which is as vital in this hurley-burley of a river as it is on a chalkstream.

What else have I learned? Oh yes, that beneath the usually clear but sometimes tea coloured surface of the river good trout are practically everywhere. To out wit them you must know where to seek them. In the daytime this may mean wading to the far side of the river were only the mildly intrepid and certainly, trouser waded anglers go.

At dusk when wading back across the river I’ve often met big fish lying on the shallows with their backs out of the water. At the last knockings of the day, if you wait and watch, you may well catch them there. In short, the Usk is full of fish and not a stocked brownie among them.

The sceptical do not believe this. The only way to convince them is to bring in a nice bag of fish and plonk them down conspicuously on a platter in the hotel hall.

I had fished the previous afternoon without notable success, in fact without any success at all. Conditions looked encouraging. Water clear and slightly high but falling. A few pale olives hatching and every now and again one of those sulphur yellow jobs I’ve previously described, and even the odd mayfly.

No trout showing at the surface though. I tried several favourite runs, prospecting with a dry Greenwell. The old Canon would not have liked the way the fish treated his famous pattern – ie with utter contempt

The trout, if they were feeding at all, were feeding down below. An occasional dimpling in a still, calm run suggested that an upstream nymph might awaken some response. It did. A small Pheasant Tail was taken at the first chuck by a fish that was all of a pound. Off he went downstream, round a rock and under it and that was for the afternoon.

Back now to the day of the downpour. By 7:00pm, the time at which we had agreed to set out jointly to empty the river of trout, the grey squalls previously mentioned had joined up to become a continuous Welsh monsoon.

More sensible men would not have bothered. But the same thought struck us both. By morning the Usk would be 4 feet up and the colour of tomato ketchup. It was now or never. Why not now?

In a strange way it was very enjoyable. Fishermen, like wildfowlers, tend towards a masochistic streak. There is, with hindsight, a pleasure to be derived from suffering, particularly when suffering is accompanied by a measure of success.

Nick was doing alright, with of all things on such a night, a small pale dry-fly fished on his usual short line. In my more modest way I was doing alright also, but with a nymph, casting it upstream to take fish.

By ten past nine that June night it was too dark to see fish, fly or even river. When we finally met we had a surprisingly fine bag of Usk trout between us, two fish going over a pound, which is good in that river under any circumstances.

The resident anglers had all retired to bed by the time we reached the hotel. Didn’t seem worth boastfully laying out our catch on a platter in the Hall. Anyway, I doubt whether anyone would have believed us on such a night. Next morning the Usk was up 4 feet and the ochre colour of a Maasai warrior’s robe.