A grade I listed fortified manor house and ruin of an early medieval tower boasting more than 900 years of history, Tretower Court and Castle is an ancient wonder that has survived multiple wars and conflicts and has been redeveloped for the enjoyment of all of its visitors. The manor house and garden have been tastefully restored to their former glory.

Here are the most common queries. For more information, visit the official CADW website

Where is Tretower Court and Castle?

Tretower Court and Castle/Llys a Chastell Tre-tŵr, Powys, Tretower, Crickhowell, NP8 1RF (less than 5 minutes drive from the hotel). Or you could walk – it’s about a mile and half.

When is Tretower Court and Castle open?

How long should I spend at Tretower Court and Castle?

How much does entry cost to Tretower Court and Castle?

Can I park at Tretower Court and Castle?

Is Tretower Court and Castle wheelchair-accessible?

The entrance to Tretower Court and Castle is cobbled, which may pose a problem for wheelchairs and buggies. A side entrance can be used, if required.

Are toilet facilities available at Tretower Court and Castle?

Yes,  and disabled toilets are situated within the grounds.

What’s the best time to visit Tretower Court and Castle?

Tretower Court and Castle is open year-round, with opening times differing depending on the season. During the high season, the staff perform re-enactments of previous events that have taken place throughout history.

Is Tretower Court and Castle dog-friendly?

Yes, dogs are welcome and can enter free-of-charge (with a fee-paying human, of course!)

Is there WiFi at Tretower Court and Castle?

WiFi is not currently available at Tretower Court and Castle.

Tretower Court and Castle is located just 2 miles from the Gliffaes Country House Hotel, making it easily accessible by car and just a 30 minute walk away.

Construction of a motte and bailey castle started at the beginning of the twelfth century. This was initially built from timber and soil, before a shell keep replaced it some 50 years later.

At the turn of the fourteenth century, although the castle was still in use, construction of the court began. The north range was built first, with the west range, south range and east range being added over the next two centuries under different ownership.

The castle was commissioned by the Norman adventurer, Roger Picard II and updated by his son, John. It wasn’t until Tretower Court and Castle was gifted to Sir Roger Vaughan in the fifteenth century (by his half-brother, Sir William Herbert) that extensive refurbishment and redevelopment began.

Sir Roger Vaughan was an affluent man and required an abode befitting of his wealth. He set about updating the north range by creating a second storey and added an entirely new west range which doubled the size of the court.

Tretower, The Battle Of Agincourt And The Vaughan’s

Tretower Court & Castle is one of the sites most strongly connected to Agincourt. Not only was it the likely muster point for all local soldiers (including a strong contingent of Welsh longbowmen) who responded to Henry’s call of arms in 1415, but later in the fifteenth century, it became the home of the Vaughan family, the descendants of Sir Roger Vaughan, who is said to have fought at Agincourt alongside his father-in-law, Sir Dafydd Gam.

Both men tragically perished at Agincourt. However, legend has it that they saved Henry V’s life during battle, protecting him from French knights when he fell from his horse. According to later tradition, their heroic defence of the king brought them knighthoods as they lay dying on the battlefield.

The Vaughan’s remained at Tretower Court and Castle until 1783 and a programme of improvements continued under Sir Thomas Vaughan and Charles Vaughan. This included the addition of new staircases, cellars, entrances and perimeter walls.

Once the Vaughan’s had moved on to a different property, the ownership of Tretower Court and Castle changed hands several times, often to local farmers. The condition of the magnificent manor deteriorated rapidly, with the previously majestic rooms being used to store items and accommodate animals.

The neglect suffered by Tretower Court and Castle in the post-Vaughan era had left it on the verge of ruin. In 1929, an appeal to the government proved successful, and the site was purchased. A programme of restoration took place over the next decade to reinstate its former glory.

Tretower Court and Castle is now operated by Cadw, a division of the Welsh government responsible for protecting and preserving historical buildings and structures.

While some parts of the site were beyond repair, much of it now resembles its former distinction. The great hall is laid out as it would have been for a banquet all those years ago and the gardens are home to the white roses that symbolise Sir Roger Vaughan’s Yorkshire roots.

The Garden At Tretower Court And Castle

The garden at Tretower Court and Castle has been landscaped to recreate the feel of how it was in the fifteenth century. The dry stone walls and stunning backdrops make this the ideal location for some medieval-style photography. There are a number of picnic benches situated here where visitors can enjoy their lunch.

Tretower Court is available to hire for weddings and civil ceremonies. With the ability to accommodate up to 100 guests, this is an out-of-the-ordinary option for couples looking for somewhere unique on their special day.

3)      It has remained standing through several wars

How To Find Tretower Castle and Court

With the Gliffaes Country House Hotel being so close to Tretower Castle and Court, you will be able to take in much more of the immediate surroundings should you choose to walk.

However, for those who are driving, simply head east as you exit the hotel and continue for 1 mile before turning left on to the A40. Continue for approximately 150 metres before turning right. Proceed for around 600 metres and cross the river Rhiangoll and then turn left as you reach St John the Evangelist church. Tretower Court and Castle will be on your left.

Other Attractions Near Tretower Castle and Court

For budding historians, a visit to the Y Gaer museum is highly recommended. Located in the market town of Brecon, this trip ticks multiple boxes.

The Glanusk Park and Estate is within 1 mile of Tretower Court and Castle and offers visitors the opportunity to experience fishing, walking and cycling within its vast grounds.

For those wishing to visit other castles, Crickhowell Castle is situated just 3 miles from Tretower Court and Castle. Built in the same era, this ancient structure is equally as fascinating. 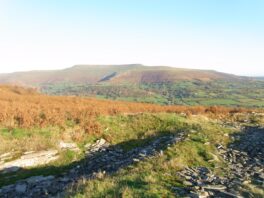 8-Mile Walk in the Black Mountains

An 8-mile walk taking in the peaks of Pen Allt-mawr, Pen Cerrig-calch and Table Mountain in the Black Mountains. 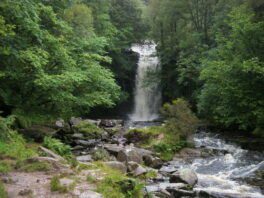 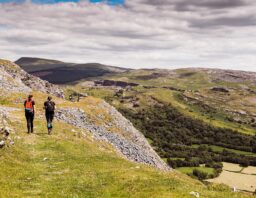